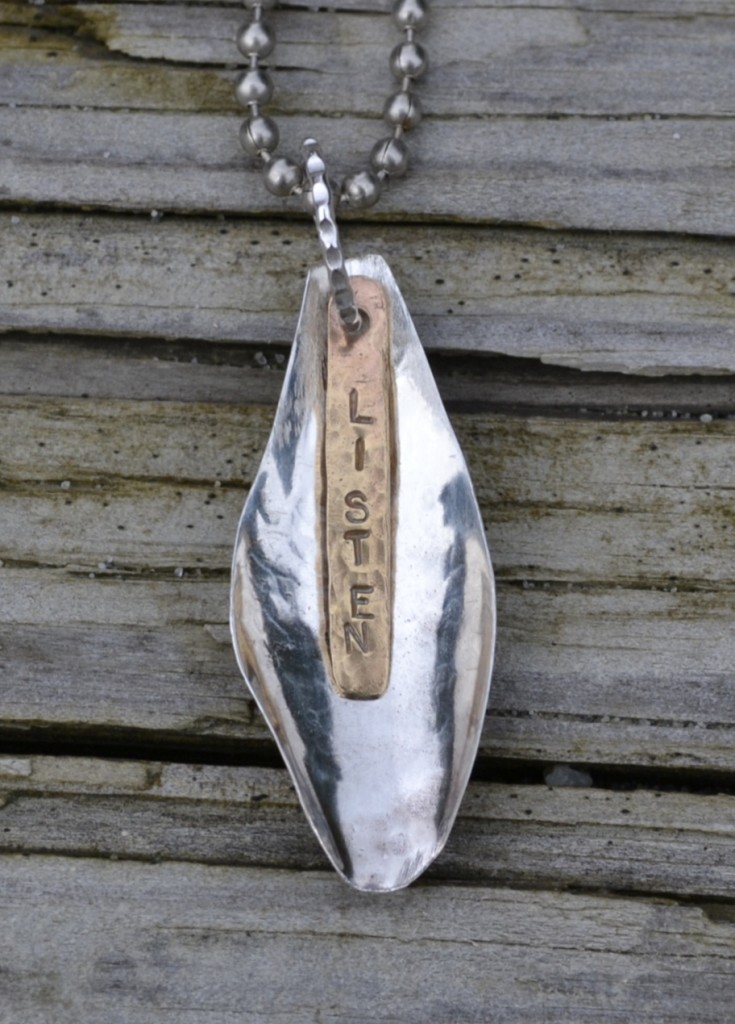 The ‘Listen’ Lotus Petal began as an invitation by artist Morag Northey, to create a piece of jewellery symbolizing ‘Listening.’ People who attend her Together Calgary events February 27 thru April 2012 could wear the pendant to remind them to make space in their lives, and to listen to themselves and those around them.

Ignited by a creative spark, the Lotus Petal came to life by loosely doodling while I listened to the silence of the journey and refrained from judging or controlling the direction allowing space and silence to show me the way. It was only when I drew a simple single line drawing of a petal did I pre-conclude that ‘that’ would be far too boring and continued on my path of creative discovery. There were several incarnations until I observed unfolding before me a symbolized picture of Morag Listening through her voice and cello – an upside down dandelion seed floating in the wind! Perfect!

Having no idea how to build something so soft out of a piece of metal I was confident that the way would be revealed by listening! What I heard was a whisper in my head that said ‘start with the simple one.’ Listening, and feeling a little defeated, I took a small piece of silver and in what seemed to be an inordinately short period of time watched as this perfectly simple beautiful Lotus Petal came to life. It had everything that depicted listening: space, freedom, silence; alone and singular yet part of the whole, with purpose – I loved it!

It was only then I researched the many meanings of this ancient symbol:

The Lotus flower symbolizes clarity of heart and mind. It represents holiness, purity, positive energy and the unfolding of the spiritual connection to the divine – available to us all. The lotus flower grows in muddy water, rising above the surface opening toward the sun with remarkable beauty. The flower closes and sinks underwater at night to rise and open once more at dawn. The lotus flower represents continuous growth in-spite of its roots. A single petal is a symbol of enlightenment.

The shape of this particular design also depicts a hand outstretched: welcoming, giving, comforting and offering non-judgemental wisdom, and here I was inspired by one of Morag’s songs ‘I am Your Hands Outstretched’ – things come full circle.