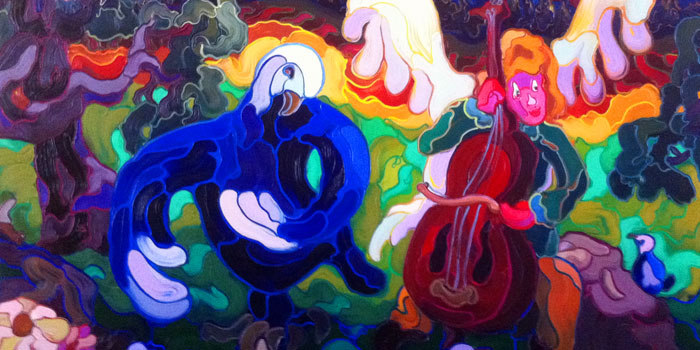 A distinguished virtuoso, her playing enraptures our mind with an artistry that brings blissful pleasures to the soul.

“Night after night I witnessed as Morag was called to perform in an exclusive engagement in the Athletes Village throughout the Vancouver 2010 Olympic and Paralympic Winter Games. Her ability to organically weave an invisible thread of mesmerizing and inspiring music captivated World Class Athletes, Dignitaries, and Heads of State; when asked “Where do you get the music from?” Morag replied ‘From you, you are the music!’

Some artists use a canvas to communicate to the world, Morag uses her voice and cello to produce lasting impressions of sound that resonate in a place so deep it transcends cultural, generational and gender biases invoking the universal desire for healing, peace and unity.”

“Morag has been my cello teacher for over a decade, a decade in which she has enriched my life immeasurably. Morag is a strong believer in the miracle of ‘cello’: Morag’s ‘cello’ heals, challenges, soothes, connects, teaches life lessons, guides in meditation and so much more. As a teacher, Morag balances strong pedagogical and ethical foundations with love and humour. She challenges us to come to know ‘cello’ as she does. Her students quickly come to understand how the miracle of cello happens and that it is no accident. I am truly blessed to have Morag and cello in my life.

“One of the most radiant and loving people you will ever meet.”

“When our family decided on cello lessons for our son, we never expected to find a new family. Morag says it all the time “this is your cello family” and it is so very true.

Morag’s view on cello, music and life in general makes the cello lessons a great experience. When we register, Morag strongly suggested cello ensemble for our child. She was so right. He made friends at group classes and it keeps him motivated with his cello practice. Studio recitals are good motivator as well. They are something to work towards to and a chance for each child to listen to each others’ progress over the year. It builds the children’s confidence to play in front of the public.”

“Ms Morag is an inspiration!  Her ability to motivate and encourage students is so refreshing. One can really tell that she loves the children and has a real passion for what she does. We love to sit in her studio and observe her working her magic with other students when we get to lessons early. We enjoy it so much that we have often said that we could be flies on her wall all day listening to all the wisdom and teaching that she has to impart!  We look forward to lessons every week and it is a reprieve at the end of a long week!

Thank you Morag!!  We are so blessed!”

“I’ve had the pleasure of discovering cello as an adult student under Morag’s guidance. Morag has provided me with a solid understanding of technique fundamentals, while being flexible in how I explore my preferred music genres. Regardless of what I’m playing, Morag holds me to high technical standards, and never stops believing that I can do it!”

“I have known Morag Northey for many years and have been inspired by her music and her passion to help make the world a better place. The ‘Together Calgary’ project is a wonderful idea and I encourage people to spread the word about it. Hope to see you there!”

“Morag is a great teacher fully committed and highly professional. She can read people and she is able to adapt the program to ensure success without cutting corners on quality of play. Her cello choir is a lot of fun and the repertoire is quite diverse.”

Damien D.
“I had been playing cello for about 10 years when I began taking lessons from Morag. I started cello late in life and always thought that was the reason why I was never really happy with the sound of my music. Morag has taught me patience, and how to use my entire body (and bow) to create the beautiful, clear ringing tone that my cello was meant to produce. ”
Shannon Hollman-Merz

“Morag’s music has helped many of my students to dance, embrace life, and smile. She is the most ever energized happy person that I have met. She has a natural healing energy and by only being close to her, one can feel it. Her life experience is full of aliveness even in the midst of her own pain, she understands life is a Miracle and she is part of this miracle.

Morag’s non-judgemental way is the key to opening anyone’s heart and filling it with compassion. I truly think she is a natural healer.”

“I found the deep, resonate sounds of Morag’s cello very comforting and grounding. She created an optimal space for meditation in my home and helped to deepen my healing from cancer.”

“Morag’s musical voice is uniquely expressively rich. Her transparent honesty gently compels one’s ear to listen in. In performance I have witnessed casual passers by to stop and rivet their attention her way until she stopped. I believe this project to be an extraordinarily generous gift to the community of Calgary. Her music will most certainly touch hearts and quiet minds.”

“I really like learning to play the cello with Morag because when I try a new piece it makes me want to jump up and dance! Sometimes when I’m feeling worried the music relaxes me and those feelings slip away.”

“Morag Northey is one of the most passionate, unique, sensitive and expressive musicians I have ever encountered in all my years. I came to her to study the cello, and my eyes were opened up to new worlds of possibilities in music practice and performance born first from inner peace.

When you hear her cello voice, you will be truly touched.”

Sounding from every possible angle

Forms the music of the world

Is to translate that sound

Sing it from the heart

And offer it back to the world